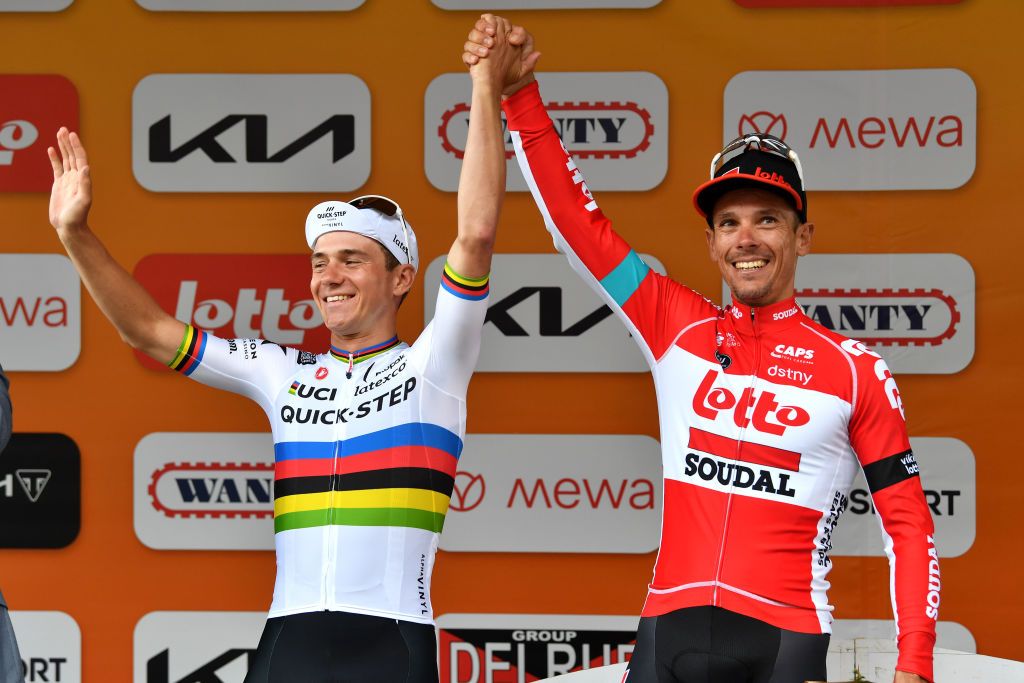 Crossing a finish line in 108th place may not sound like a memorable result on paper, but for once the outcome barely mattered. For reigning World Champion Remco Evenepoel (QuickStep-AlphaVinyl), his first race in his home nation Belgium with the rainbow jersey on his shoulders was always going to be very special.

When Evenepoel rolled across the finish line at Binche-Chimay-Binche, more than six minutes down on winner Christophe Laporte (Jumbo-Visma), it was in the company of teammate and long-time mentor Iljo Keisse, as they celebrated their final race together.

Keisse will go on to race in one more road event in his career, the Memorial Rik van Steenbergen next Sunday, while Evenepoel is now pulling down the curtain on a year in which he has taken the Vuelta a España, Liège-Bastogne-Liège and the UCI Road World Championships.

After launching some spectacular attacks mid-race in Binche-Chimay-Binche, then dropping back in the last of the 16-kilometre local laps to cross the line with Keisse and with cheers from the local fans ringing in his ears, as Evenepoel told reporters afterwards, “I’m ending my season with a big smile on my face.”

“I knew my legs were not so great, so I wanted to make the most of what I had,” Evenepoel said when asked about his spell of attacking mid-way through the race. “Then at one point Rik [van Slycke, sports director-Ed.] said over the radio that Iljo had been dropped, so I decided to go back and do the last lap with him.

“It’s our last race together so I wanted to finish it off well with him.”

Evenepoel paid fulsome tribute to Keisse, saying “he was the most important rider in my career, at the start of my career.

“I’ve learned a lot from him and it’s normal to want to come home with him today. After so much racing and so much time spent as my team hotel roommate, I couldn’t have ended the race in a better way.”

Another veteran rider on the point of hanging up his wheels is former World Champion Philippe Gilbert (Lotto Soudal). The 2012 rainbow jersey holder made it into the decisive break of the day but eventually had to settle for sixth after Laporte and Rasmus Tiller (Uno-X Pro Cycling) managed to get away.

Gilbert will race in Paris-Bourges and Paris-Tours later this week, but Tuesday was the Belgian’s last event on home soil.

“It was a tricky finale, the two of them went away and we got to within a few seconds, so it’s a bit of a pity. But I wanted to be up there and be in the mix, so that was fine,” Gilbert said afterwards.

“There were lots of fans on the sides of the road and even with Remco to cheer they gave me a nice ovation at the end, too, so many thanks to them.”

While Gilbert will pull down the curtain on his career in five days’ time, Evenepoel will now get ready for his upcoming wedding on Saturday and then a well-earned rest.

“It’s been really nice here with the public, I can end my season with a big smile on my face,” Evenepoel said. “So now I want to go on holiday, enjoy some downtime and then get ready for next season.”

Waterproof fabrics explained: What are they and how do they work?

The Trxstle Geryon is a Universal Front & Rear Bike Rack for Any Bike!

Tadej Pogacar: The distance can help me at the Tour of...