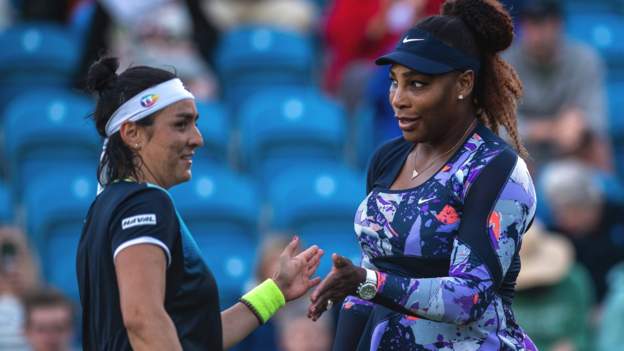 because there’s somebody ahead of her who has done this. And Serena and Venus really inspired a lot of black girls.

“Tennis was a white man’s game in Africa. But when these two girls started playing, all of a sudden we all discovered we could play and get into tennis.

“They have been more than just tennis players. They have been totally inspirational, and especially Serena for 23 Grand Slam titles. It’s just unbelievable what she has been able to achieve.”

Serena ‘will not be forgotten’

Away from the court, Williams will also be remembered for speaking out against racism, pushing for gender parity and equal prize money, and about her experiences of the healthcare system as a black woman.

Her individuality has helped her stand out, according to Mbugua Karani, and given African women body-positivity.

“She played her own game, she’s her own person,” the 49-year-old said.

“She’s hardworking like crazy. Her body is a very African body.

“And for those girls, just wondering, worrying too much about ‘I need to be a certain way’, they can see [their] African body is enough to be able to play this game.

“On top of that, she has a business mind. She’s kind, and she started a family. So these are just some of the things that the girls have been looking up to.”

Emotions will be high when Williams finally bows out of the sport next week, with her millions of fans across Africa amongst those who will feel her absence from the court.

Mbugua Karani says this US Open will be more keenly watched than ever as Serena’s supporters hope for a fairy-tale end to an exceptional playing career.

However, last week she lost to British number one Emma Raducanu in straight sets in the first round of the Cincinnati Open.

“We will certainly miss her. Every time she speaks to the media, we are always listening. We have a big screen at Nairobi club and whenever she’s playing the club is full with guys just coming to watch her match more than anybody else’s.

“But she will not be forgotten. We will see another amazing chapter from her.”

Aussies determined to continue doubles success at US Open 2022 |...

NFL Week 9 Awards: Jets kicker wiped out and had the...