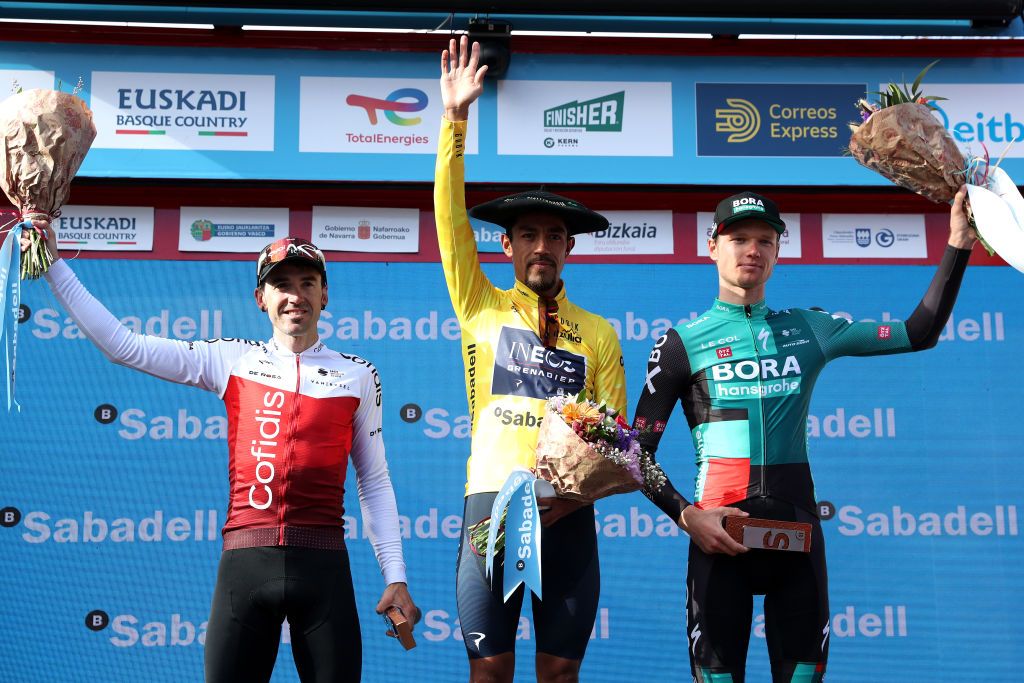 Despite a breathless and tactical approach, most of the main podium contenders arrived together at the last of the day’s seven climbs, where Remco Evenepoel (QuickStep-AlphaVinyl) suffered, fell away, and lost the yellow jersey.

Martínez, who was forced into a chasing alliance with Evenepoel ahead of the penultimate climb, weathered the storm on the steep final climb of Usartza to seal the title 2km further on in Arrate.

The Colombian crested the final climb in a five-man group with Izaguirre, Aleksandr Vlasov (Bora-Hansgrohe), Jonas Vingegaard (Jumbo-Visma), and Marc Soler (UAE Team Emirates). Soler led out the sprint but only paved the perfect path for Izaguirre, who surged through and held off Vlasov before punching the air in delight.

Adrenaline was surely still flowing through his veins after he had to come back from a bizarre crash on the climb a few kilometres previously. He’d caught his front wheel on the rear wheel of a swerving Vingegaard and hit the deck, before launching a furious chase through the hordes of his home Basque fans at the roadside.

In the end, it was a double celebration, with the stage win accompanied by a jump to second overall on the final standings as not only Evenepoel but also Pello Bilbao (Bahrain Victorious) – third at the start of the day – fell away on the final climb.

That meant that Vlasov – who was a leading force in the front group on the upper reaches of the final climb – himself bagged the final spot on the final podium, having started the day fifth overall. Evenepoel had to settle for fourth overall, while Bilbao rounded out the top five and Vingegaard was the only other rider within a minute of Martinez in sixth.

The final climb of Usartza, followed by the 2km run-in to Arrate, followed a familiar format to last year’s finale on a stage where seven climbs – three of them first-category and most of them super-steep – were packed into 135km. Ineos dictated for much of the day but the race only came alive on the cat-1 Krabelin inside the final 50km, where Evenepoel lost contact for the first time as Primož Roglič (Jumbo-Visma) launched an offensive after slipping out of the overall lead on Friday.

Evenepoel was well on the back foot on the descent but a crash that took Enric Was (Movistar) out of contention provided a lifeline, as Martinez was caught out and was forced to drop back and work with the race leader to limit the damage on the gentler slopes of the Urkaregi. Evenepoel did the lion’s share of the work and single-handedly reduced the gap on the descent before stitching it back in the valley, but immediately took his eye off the ball and let Martinez slip clear as things became attacking and tactical ahead of the final climb.

On the Usartza itself – 4.5km at 8.8 per cent – things came together and calmed down to the point where Davide Formolo (UAE Team Emirates), who’d been in the day’s breakaway, was able to attack and gain a minute. However, Izaguirre kicked off the hostilities and Evenepoel was soon in trouble. Vlasov repeatedly looked to lift the pace – not least when Izaguirre hit the deck – and while Bilbao dangled off the back, Martinez never missed a beat.

The Colombian crested the climb with the overall honours effectively in the bag, leaving Izaguirre to sweep through for a dramatic victory and – after his fightback – a deserved one.

The opening 10 kilometres were just about the only flat roads to be found on the 135km route starting in the centre of Eibar and finishing just outside at Arrate. With seven categorised climbs – three of them cat-1 ascents – crammed into the short route, and with the general classification so finely poised, it was always likely to be an action-packed day and an explosive start.

The opening 10km flashed by before proper moves started to form when the road titled uphill for the cat-3 Elkorietta – 2.6km at 6.7 per cent. Cristian Rodríguez (TotalEnergies) was first over the top as he went clear with Davide Formolo (UAE Team Emirates), Tony Gallopin (Trek-Segafredo), and Xabier Azparren (Euskaltel-Euskadi).

By the first big climbing challenge, with 35km on the clock and 100 to go, the leading quintet had a lead of 1:45 over the chasers and six minutes over the peloton, where Evenepoel’s teammates were controlling proceedings.

The road kicked up for the cat-2 Endoia climb – 5.3km at 6.8 per cent – and it was followed after a short descent by the cat-1 Azurki – 5.km at 7.4 per cent. Ineos decided to take matters into their own hands and took over the pace-setting from QuickStep, quickly cutting the gap to the breakaway. Up front, both groups started to fragment on Endoia before exploding on Azure. By the top of the cat-1 climb, with 52km ridden and 83km to go, only Formolo, Gallopin, and Oliveira remained in the lead group, while Rodríguez trailed behind and had to slot into the chasing group that now contained just Kamna, Elissonde, Houle, and Arrieta.

After a sizeable descent, the road soon pitched up again for the cat-2 Gorla climb – 9.6 per cent with a relatively gentle average gradient of 5.7 per cent, though still with double-digit ramps. Ineos continued to set a strong tempo and soon they swept up the chase group, leaving three out front. At the summit, with 60km to go, Formolo, Gallopin, and Oliveira held a lead of 2:30 as Geraint Thomas led Ineos and the peloton onto the descent.

Ineos continued their work onto the long cat-2 climb of Gorla – 4.1km at 10.5 per cent – with Thomas and Omar Fraile peeling off to make way for Tao Geoghegan Hart. However, he didn’t do much of a turn before the race was exploded into pieces thanks to Roglič. The Slovenian, who lost the lead on Friday, launched a stinging attack that shattered the bunch and left Evenepoel scrambling behind.

Martinez, Vlasov, and Mas were all alive to it before Vingegaard and Izaguirre followed a move from Juan Pedro Lopez (Movistar) to get across. Evenepoel managed to claw his way back on eventually, with Bilbao following, but the group split again when Mas attacked towards the top. At the summit, with 40km to go, the Spaniard led with Martinez, Vingegaard, Vlasov, Izaguirre, Soler. Evenepoel followed alone at 15 seconds.

On the descent, things were turned upside down. Bilbao used his downhill skills to catch and pass Evenepoel before joining the front group and splitting it. Mas couldn’t follow his line through a left-hander, slowing before still crashing heavily against a roadside barrier. He’d just found his teammate from the break, Nelson Oliveira, but he was also down and out. The crash split the group and Martinez was soon back with Evenepoel, forced to work together in the interim.

The pair – with Roglic and other passengers in the wheel – reduced the gap to 20 seconds by the top of the Urkaregi climb – 5km at 4.8 per cent – before Evenepoel closed it down with a strong descent. As the road flattened out, he finished the job, but then started discussions with Vingegaard, taking his foot off the gas at a point where Martinez – who’d been towed for the best part of 15km – turned on his former ally and slipped clear in an attack with Izaguirre and Formolo. The attacks came and went and Evenepoel was again on the back foot when Vlasov and Bilbao left him behind in search of that move. The Belgian once again dragged it back on his own and probably decided attack was the better form of defence as he launched a dig of his own.

He then produced a powerful acceleration to win the intermediate sprint and take three bonus seconds – with Martinez taking two and Bilbao one – although that was irrelevant by the top of the final climb. Things calmed down in the eight-man lead group as the race hit the brief climb before the official start of the ascent. Formolo attacked and went clear, and it looked like he might be on his way to glory when the GC contenders started looking at each other and stalled to the extent that Roglic and others started to come back into the picture.

However, Izaguirre soon lit it up and Formolo faded dramatically, as did Evenepoel, who lost contact and quickly slipped to 25 seconds back. Vlasov did a couple of huge turns and managed to get rid of Bilbao to pave the way to the podium. When Izaguirre crashed, he took advantage to accelerate again in search of second overall, but the Spaniard mounted a furious and dramatic comeback, heading over the top in that lead group of five before sealing the stage victory with timing and positioning in the sprint.